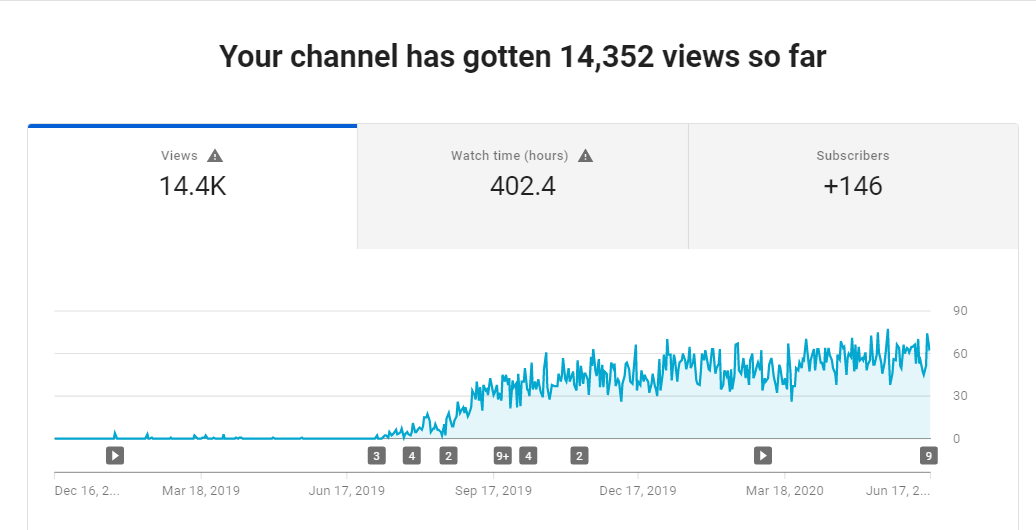 Turning the articles that are written for my job board website into videos. After creation, I’ll embed the videos back into the articles to increase organic traffic.

Some of these click-throughs were from embedding other people’s videos in my articles. There’s nothing inherently wrong with that if they’re relevant. However, I would much rather embed my videos so people are watching my stuff, keeping my brand top of mind, and keep coming back for more juicy content.

Text to voice technology has become very convincing in the last few years, so I’m going that route. In the past, I’ve taken my articles and used them as a script for the video. That would take a few hours to create just one video. From reading clearly and sounding natural to editing it took forever.

Envato Elements has been on my radar for a while and it was just a matter of time before I pulled the trigger on it. This project is that catalyst. Unlimited all sorts of assets including stock video, photos, music, and sound effects. Those assets are what I’m primarily using for this case study.

I went with the year-long subscription for $198. Even after these videos are completed maybe I’ll get an itch to create infographics for all the posts as well. Who knows.

Initially, I was going to use Camtasia to put together videos but the software continued to crash during rendering. That’s no bueno. To be fair I figured it was my computer so I wanted to go with a cloud option so I didn’t have to deal with the frustrations.

At $16 a month, I get unlimited storage and production so I can jam out videos quickly. The cloud storage is a real bonus because I can reuse assets from other videos and quickly put together a new video.

Click here to start making videos in the cloud

When I say reuse assets, I mean reuse stock videos/images that are related. Some of the stock videos I use are generic, fit the industry, and are great for introductions. It’s as easy as dragging and dropping, slapping that render button, and moving on to the next.

Gotta get those thumbnails right. Really just using the same basic layout for the thumbnails

Choosing which videos to make

That’s it. Obviously higher trafficked articles are going to be the priority, but at the same time I’d much rather put out 5 videos if they would take the same time as 1 video.

For example, one type of article on the website is something like “largest [industry] firm in [city]”. These videos are more difficult to make because I have to go through each company’s website on the list to find images of their projects

Not trying to gain subscribers

One of the biggest things to keep in mind is that I’m not trying to grow the YouTube channel. Subscribers are NOT the goal. Monetizing the channel is NOT the goal. The videos are being made to increase traffic to the website and that’s it.

Subscribers are inevitable. And I secretly apologize in advance when I upload seven videos in one day like I did yesterday.

I guess this is the starting point. I’ve already created a few videos for the website as you can see from the screenshot below.

As you can see I went hard in the fall of 2019 and went back to just writing. That lonely video from December 2018 was a walkthrough on how to post jobs. What was I thinking? Views were pretty consistent since then at around 30-60 views per day and traffic trickled in from YouTube.