If you’re just starting or have an established job board and haven’t started doing any social media for it, you’ve come to the right place. Acting as a real data guinea pig, I tested multiple social media platforms using my job board to see which ones were worth it (and which ones are a bust).

I’ll talk about what I’m doing for each platform and how it has impacted my business overall. But first, here’s a screenshot of my Google Analytics for social media traffic acquisition. 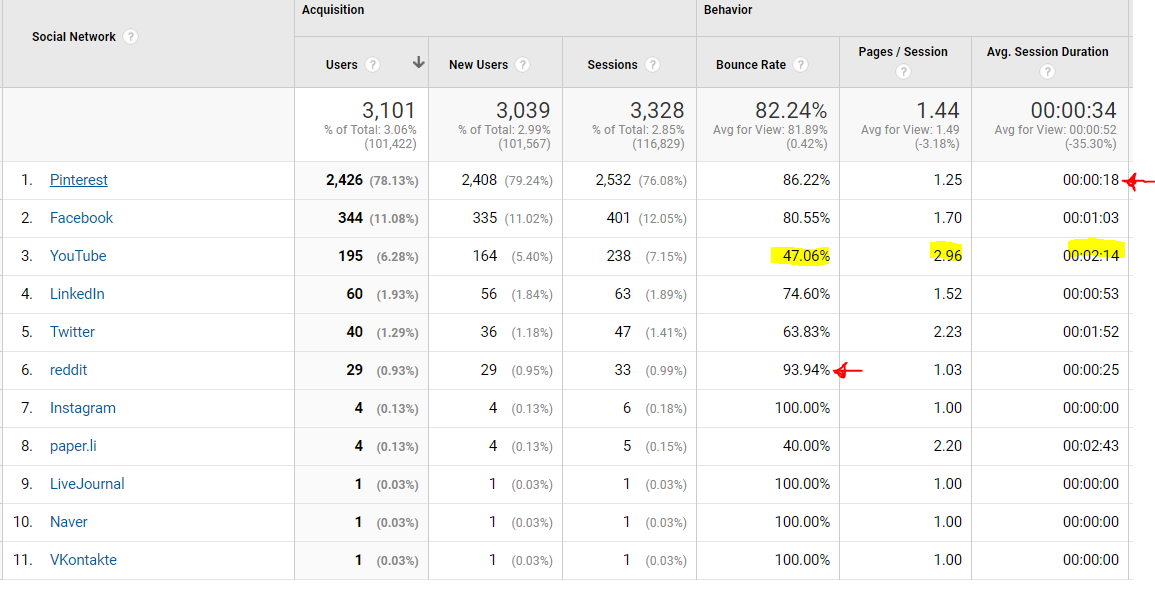 I’ve thrown a few highlights and red arrows on the image to point out a few things. We’ll get to that in a second.

To be honest, these numbers are hyperinflated due to one pin out of hundreds going viral. People were looking to buy this freaking ceramic pot in the picture and thought I could sell it to them. I could not. I talked about it a bit more in this semi-satirical post. That average session duration indicates that these people are not busy with other things.

I have a Facebook page made for the job board but I don’t even post to it. I’m guessing the Facebook traffic is from people sharing, and looking at Facebook on its own indicates that. It’s not steady traffic.

Where I’m keeping my focus for the next few weeks. If you look at the bounce rate, pages per session, and average session duration, it blows every other traffic source out of the water. We’ll ignore paper.li because four users over five sessions is hardly statistically significant. I would know because I almost failed statistics in college.

I really wish I would have spent more time growing my LinkedIn company page. For the first 18 months, I was posting and barely getting anyone to follow the page. It wasn’t until last month I learned you could invite people from your network to follow your company’s page. 100 per month.

So that’s cool, I started doing that and went from like 10 followers to 100 in a few weeks. That’s going to continue and I’ll look to increase my presence on LinkedIn when I’m finished with YouTube.

Fully automated using Missinglettr.com which allows you to schedule up to 50 pieces of content over up to a year out. Simply, easy to use, and there are maybe 450 people following the Twitter account.

Also automated using IFTTT. All new articles and videos are posted to a subreddit I created for the website. If I was to start over I would create a subreddit around the industry rather than the website so there would be more incentive for community involvement. But it is fully automated, otherwise, why bother? They’re not trying to buy or stick around.

Someday I’ll learn how to traffic leak properly on Reddit. I did post one time in a subreddit and got a whopping 15 users.

The other sources on the list (Instagram, paper.li, LiveJournal, Naver, and VKontakte) aren’t touched by me. Real social sharing action.

What Social Platforms Should You Focus On

If I could go back in time, I would put 70% of my efforts into YouTube and 30% into LinkedIn.

Oh, but it is. And even if you don’t consider YouTube to be social media, if you’re doing any amount of content marketing or SEO you should be on YouTube. You’re showcasing your expertise on another platform. Just don’t go into it trying to grow a YouTube channel.

Your goal is to boost your search rankings by embedding the videos and increase the traffic to your job board. Subscribers are simply a bonus.

LinkedIn has massive benefits due to the nature of the website. It should absolutely be part of your content strategy, both as promoting the articles and jobs posted as well as interacting with your industry’s community. If you’re super crafty, you can interact with other people and company posts as your company page which is tedious to perform but great for building brand awareness.

Don’t even bother with Pinterest. What was I thinking?

Competing against your own niche/authority website in the SERPs

How to Drive Traffic to Your Job Board

How to Monetize Your Job Board

I wrote this; it's mine. Copyright all me.

This is my affiliate disclaimer. You know what this is if you've spent time doing internet marketing. If I link to a product, it's probably an affiliate link. That means I get a commission if you purchase or sign up or sometimes even if you click. This doesn't cost you anything. I am incentivized to recommend some products over others if the commission is higher. I'll probably take that incentive.

Fortunately, since this site is quite literally my name, the risk of reputation ruin prevents me from recommending products I don't use. Hence the lack of "top X tools" type posts. Only talking about what I got going on.

Programmatic SEO Moving Forward: My Plans for the Future

Quickly Turn Your Video/Audio Transcriptions into Articles with AI (Jasper)

Programmatic SEO for Affiliates: My Thoughts as a Beginner